The forerunners of the piano are the harpsichord, the clavichord and diverse variations of keyed instruments. The first keyed instrument with hammer action had already been developed in the 15th century. At the beginning of the 18th century, there were many attempts at constructing a key instrument that allowed a dynamic method of play (piano and forte – loud and soft). The Paduan instrument inventor Bartolomeo Christofori was the first to be successful in this. The „apricembalo che fa il piano e il forte“ – translated: a harpsichord that could be played loudly and softly – dates to the year 1698 and is considered the first piano.

Bartolomeo Christofori had probably already built the first prototype by 1694. A frequently quoted source is also the Giornale die letterati d’Italia, in which the Roman journalist Scipione Maffei published a report in 1711 regarding an instrument built by Bartolomeo Christofori in 1709 with the name „gravicembalo col piano e forte“. The description of the action contained therein later inspired the German piano maker Gottfried Silbermann to the construction of the pianoforte.

Christofori’s development was already astoundingly far-reaching. The action commands the use of a mechanism with which the hammer, utilizing a jack, is propelled against the string and then freely released immediately. The undesirable effect of the hammer falling back onto the string is suppressed. Dampers suppress the further resonance of the string after the key is released. All dampers can be released by pressing a pedal so that the strings resonate further. Christofori was already using double strings (two strings per tone) in order to increase the sound volume and, since 1722 the „una corda“ action, through which the action can be shifted slightly so that only one string is struck and the sound becomes softer. The instruments encompass four octaves. Unfortunately, Christofori’s instruments found only a small audience at the time. After 1726 he dedicated himself to the construction of harpsichords. 3 of the 20 instruments built by Christofori are still in existence. The oldest stands in the Metropolitan Museum of Art in New York, a second from 1722 in the Museum of Musical Instruments in Rome and a third from the year 1726 in the instrument collection of the University of Leipzig. 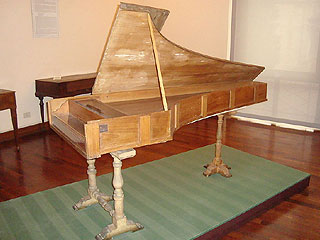 This page will contain many more detailed posts regarding piano history. We would like to begin with an especially successful handling of the history of the piano. This is from the website www.pian-e-forte.de, created by Jörg Gedan, who kindly provided it to us. His piano history impresses not only through descriptions of the various technical developments but also through the depiction of current achievements in the area of piano production.